Salary in the IT Sector: Where do software developers earn the most?

Software developers are the creative minds behind programmes for computers and are in greater demand than ever in the job market. Not only are they needed in numerous industrial sectors like the manufacturing of electronic products, but also in the financial sector and even the pharmaceutical industry. Due to the high demand, employees have a whole host of companies and locations to choose from. Naturally, it is interesting to know which country offers the highest salary and for which know-how they pay the most.

Below is a comparison of the average salary of different countries, included amongst others, the U.S., Switzerland and Canada.

Important data about work experience and technical expertise will be taken into account as well, to get a general overview of the wages for software developers.

With an annual income of about 96,000€, the U.S. leads the field in the international ranking, followed by a European country, Switzerland, with an average salary of about €74,000.

The wages of software developers in the Netherlands, Germany and Australia lie somewhere in the middle, with an average income between €43,000 and €48,000. 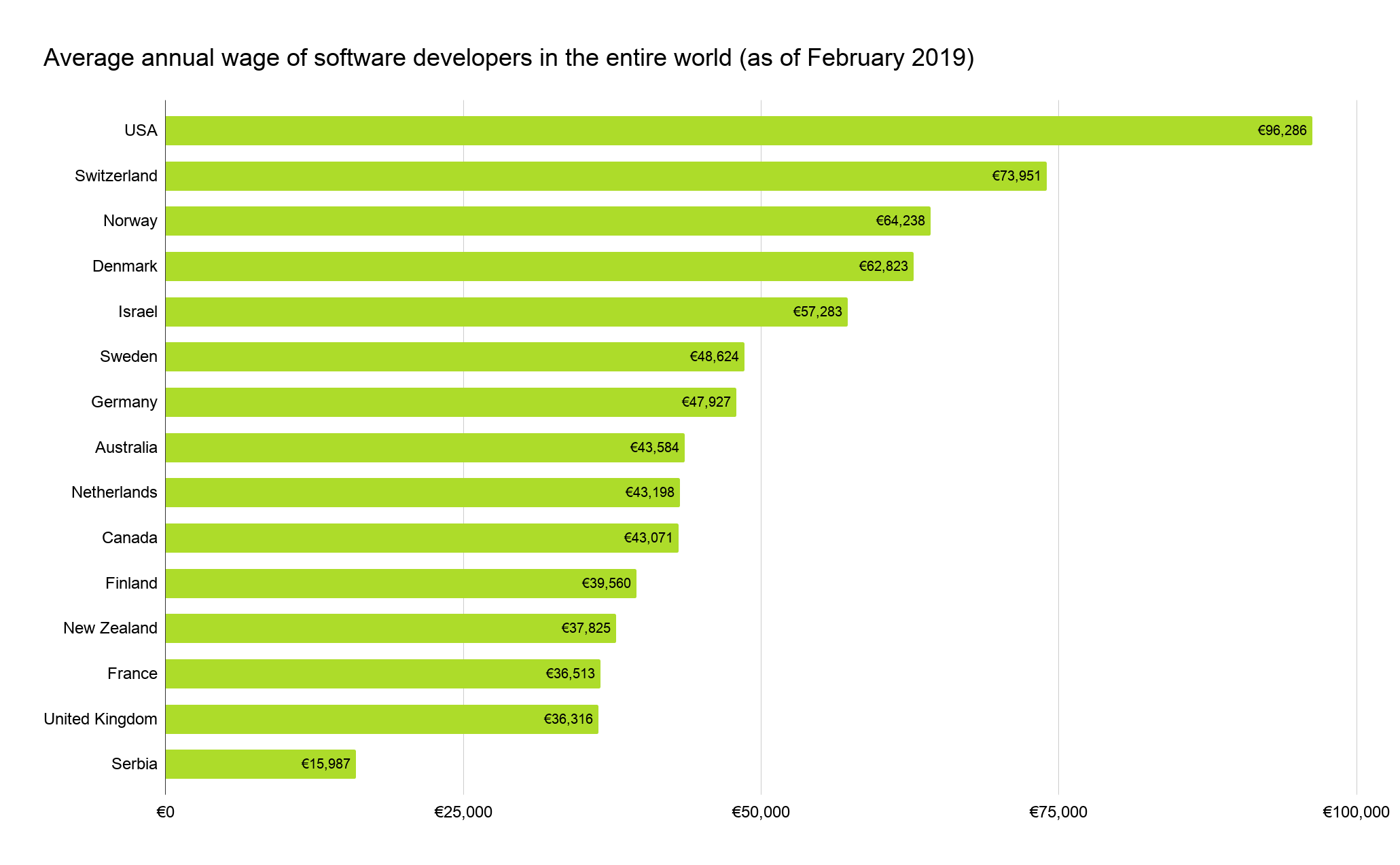 2. Overview of Wages in Europe

In Europe, Switzerland is in the leading position regarding the highest salary for software developers, with about €74,000. Norway is in second place with about €10,000 less, followed by Denmark with roughly €63,000.

Surprisingly, as some of the North European countries, Finland and France takes one of the lower spots on the chart with an average income of €39,000 and €36,000, respectively. On the rear end is Serbia with an annual wage of about €16,000.

3. Comparison of Wages based on Work Experience in the entire World

For entry-level workers, it is especially interesting to know in which country they earn the most right from the start. But it quickly becomes apparent that the increase in salary over time varies heavily depending on the country.

While entry-level software developers in Switzerland earn the most with around €70,000, the salary for people in leading positions in the U.S. increases to almost €91,000. This means that compared to the starting salary in the U.S of €63,961, there is an increase of over 41%, which is the highest among all countries.

While aspiring software developers in the United Kingdom earn considerably less per year, salary for leading positions in the UK (about 54,000€) is still higher than in France (€50,000) or Finland (€51,000). Wages are the lowest for entry-level workers in Serbia with €10,000. 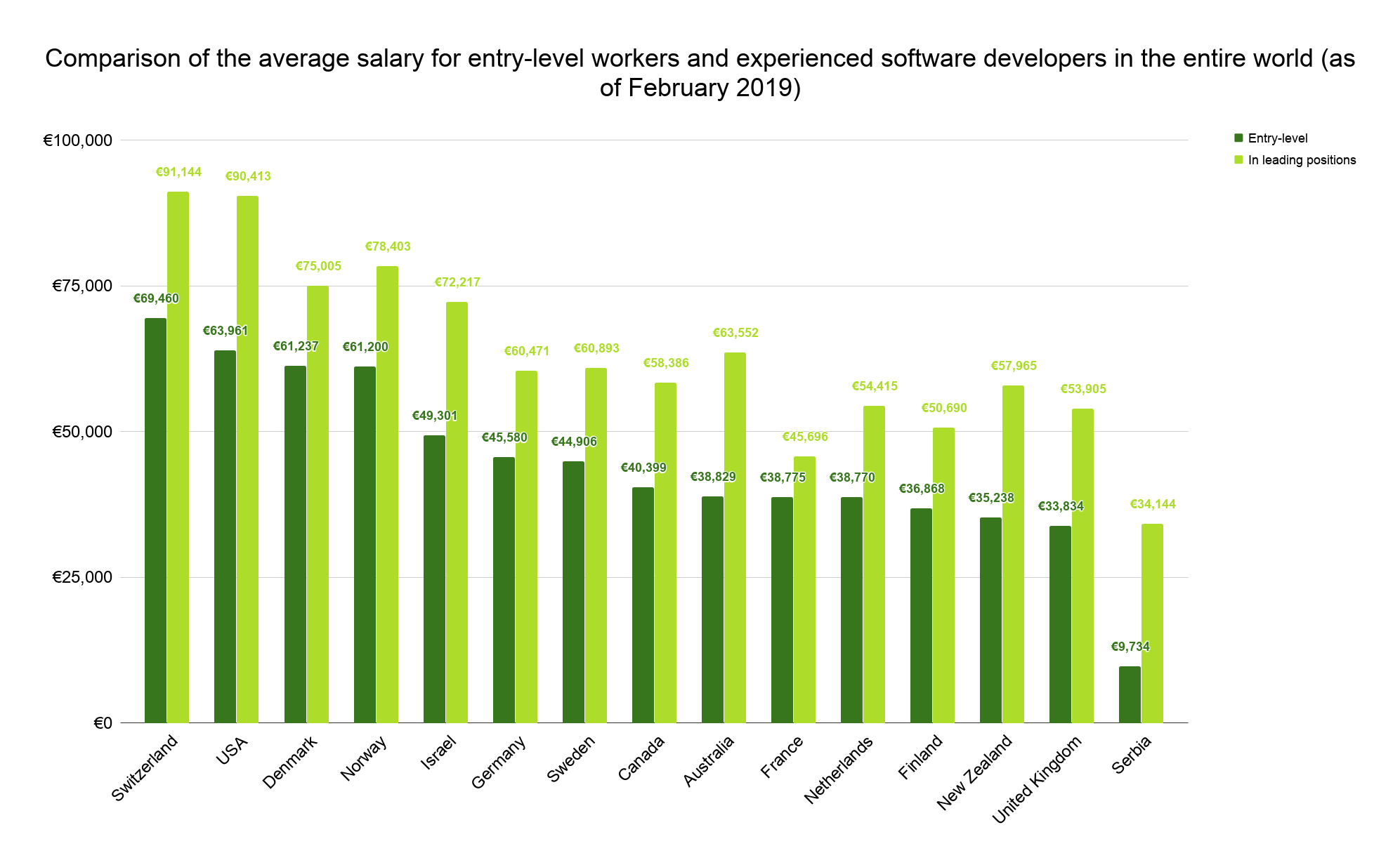 4. International Comparison of Wages of Software Developers based on Work Experience and technical Know-How

Not only is it important to know how high the salary in regards to work experience is, but also which type of technical know-how gets paid the most. Surprisingly, there is a significant discrepancy between different countries.

In the UK, a software developer with experience in Java earns significantly more than one with experience in another programming language (€64,000). In the U.S., an employee with knowledge of C++ earns the most by large with about €105,000. On the other hand, the difference in salary in Germany between programming languages varies only slightly (the average income ranges between €43,866 and €48,631).

In Serbia, software developers with knowledge of JavaScript earn the least by far (€16,768).

5. Development of the IT Sector in the following Years

In the last couple of years, the IT sector has been the fastest growing part of the economy in many different countries. This is due to digitalisation and globalisation becoming an ever-increasing factor for businesses all around the world. The next generation of clients and employees will be the so-called “Digital Natives”, who bring a whole bunch of new demands and expectations to the market, which companies then have to adapt to in order to stay competitive in the constantly changing world of Internet.

While nobody can predict the future 100% accurately, it is safe to assume that the development of the IT sector will follow the trend of recent years, which means an increase in wages, more flexible working hours and companies hiring new talents to reinforce their IT teams in preparation for the future of digitalisation.